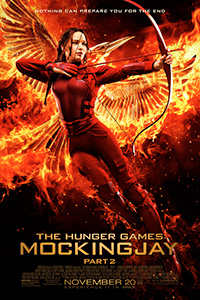 All good things must come to an end. Some go out with a whimper, others with a bang. Hunger Games: Mockingjay Part 2 is the latter – a worthy end to quite a journey for Katniss Everdeen. This film picks up right where the other ended. Katniss is in the once thought destroyed District 13. She’s banged up but recovering. Peeta is still in isolation after being brainwashed in the Capitol. Hammish, Gale, Plutarch, and Finnick are there to rally with Katniss and plan a way to get into the Capitol to kill President Snow and free the people of war torn Panem.

From the movie synopsis blurb - What lies ahead are mortal traps, dangerous enemies and moral choices that will ultimately determine the future of millions.

We’ve watched Katniss grow and she’s a bit weary now – tired of fighting, tired of the stress, and afraid she will fail those who depend upon her. However, the girl has gumption and a good team who has her back. In Mockingjay Part 2, she has to dig deep and fight for Peeta’s soul. Will she ultimately choose him or Gale? Was there ever a question?  President Snow (Donald Sutherland) is so evil, so full of snake oil, and he knows better than to underestimate Katniss. Believe me, there’s a Holy Crap! scene that will have you cheering.

Jennifer Lawrence as Katniss has been so perfect for this role. She embodies character, growth, loyalty, and a stoic presence. She is a true heroine. Josh Hutcherson has grown as Peeta, the baker boy. He and Katniss have been thrown together and their strength and bond has evolved. Woody Harrelson as Hammish has offered Katniss wisdom and strength of friendship. The word strength keeps appearing and that’s the key to the Hunger Games series – it’s been the key to survival after all.  Time to put down your bow and arrow. Time to say farewell to Katniss. The odds have been forever in our favor, after all.