Book Review - The City of Mirrors 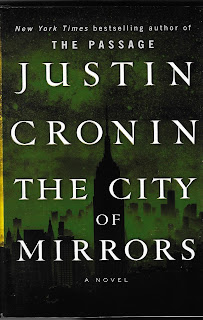 The City of Mirrors by Justin Cronin gives a thrilling finale to a trilogy.  It has been awhile since The Passage and The Twelve, but the story rushes quickly into action and Cronin is kind enough to throw in breadcrumbs to remind us of people, places, and things (like virals).  Civilization fell after a great blood disease swept the land thanks to the bite of virals. But some humans survived and slowly built The Colony. Now from the cover blurb:

The Twelve have been destroyed and the terrifying hundred-year reign of darkness that descended upon the world has ended. The survivors are stepping outside their walls – daring to dream of a new future.  But far from then, in a dead metropolis, he waits: Zero. The First. The anguish that shattered his human life haunts him, and the hatred spawned by his transformation burns bright. His fury will be quenched only when he destroys Amy – humanity’s only hope, the Girl From Nowhere who grew up to rise against him. One last time light and dark will clash…

Oh this is quite a saga. Past and present. Strong characters with sons and daughters carrying on – eager to farm the re-birthed land, eager to welcome children, and willing to mourn their dead. But something was coming, Lucius could feel it. He knew it the same as he knew his own heartbeat, the wind of breath in his chest, the carriage of his bones. The long arc of human history was headed toward a final test…..it would be a time for warriors. (p.18)

Excellent writing pulled me forward in this journey, reading quickly, holding my breath, rooting for our heroes. History is more than data, more than facts, more than science and scholarship. History is a story – the story of ourselves. Who are we? (p. 568).  You will find out, dear reader, and you will question your role in the history of mankind. Will you see yourself in the mirror, eager to remain strong, and to fight for what is good – family, friends, and life?

Superb trilogy and The City of Mirrors by Justin Cronin is a tour de force finale.
Posted by Joanne at 6:00 AM

Labels: book review, Justin Cronin, The City of Mirrors, The Passage, The Twelve