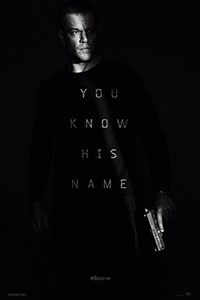 Bottom line – Jason Bourne, the new film), is a boring retread. I had high expectations and they were crushed by a yawn inducing tale of a network of terror and technology with unchecked power.

Once again Jason (the always decent Matt Damon) is having flashbacks and remembering stuff. It’s been ten years since he went off the grid, but he’s back in sight thanks to Nicky Parsons (Julia Stiles), his former contact. Well, the agency is tracking her hacking and it’s a vicious circle of exposure. A weary director Dewey (Tommy Lee Jones) wants Bourne erased. A newby agent Lee (Alicia Vikander) sees her chance for a power grab and she tries to lure him in. Oh so innocent, she’s not aware of Dewey’s orders and the evil Vincent Cassel who wants revenge on Bourne for past problems.  Plus, now there’s a super internet mogul who’s partnered with the devil Dewey and has no idea of the ramifications of getting in bed with the government.

Chase after chase after chase after chase. Been there, done that.  It’s a shame that nothing new is brought to the excellent Bourne series.  With furrowed brow and curled fists, Damon does his best to fight evil and he’s always one step ahead.  That’s the good part. Unfortunately I needed Dramamine for the film’s shaky camera – have you feel like you are in the middle of things – perspective. Whew. My head was spinning by the end, and not in a good way.

Save your money and stream Jason Bourne someday.  I regret saying this is not worth popcorn and a soda.
Posted by Joanne at 6:00 AM