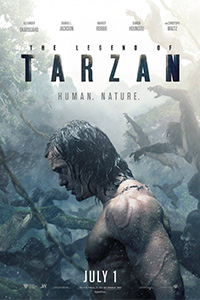 We all think we know the Tarzan story, but this new movie Legend of Tarzan is an excellent version. We meet Lord Greystoke (Alexander Skarsgard) and his wife (lovely Margot Robbie) in London. He’s been called by a council and asked to return to The Congo to see what King Leopold is up to in regards to trade and money. In theory this is as an ambassador but in reality, as Tarzan, he is being lured in as part of a barter – a nefarious scheme by a crooked captain (played by the always evil Christoph Waltz).  Fortunately an American (Samuel L. Jackson) is along for the ride, and quickly becomes an ally in a deadly battle against slavery, diamond dealing, and revenge (a tribal king played by Djimon Hounsou is not pleased).

The early scenes in the Congo are one of welcome. Tarzan’s old tribe greet him warmly and life is grand. Alas, the captain has his minions capture tribesman, the wife, and set fire to the village. Mayhem ensues.  Enraged, Tarzan and Jackson head out to save the wife, free the slaves, and get to the bottom of the Congo’s secrets. Fortunately, Lord Greystoke sheds his shirt (wow!), swings from vines, communes with the gorillas and other jungle creatures, and fulfills the legend.

This movie is lush and well done. The acting is above par, the Tarzan aspects are not cheesy, and the film is action packed. Alexander with his gray green eyes, chiseled face and body, and brooding demeanor is a worthy Tarzan. Do your best jungle yell and swing in to see Legend of Tarzan.