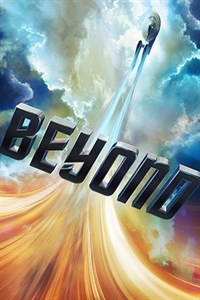 Before they leave on their mission, we see Kirk chat with his boss – is he contemplating a desk job? Spock chats with fellow Vulcans and learns of a loss (all hail the late Leonard Nimoy – this is a good tribute). Thus, is he contemplating another life? Well, leave that behind as The Enterprise heads back on a mission beyond the nebula to find another space crew and help a lost commander. But is she good or evil with an ulterior motive? Oh no!!!

Star Trek and the Federation talk of unity, peace, and goodwill, but like today’s Earth the ideas are good but tough to implement. Tough to comprehend when your ship is being attacked and all the warp speeds and shields don’t seem to matter.  Crashing and trying to save his captured crew, Kirk joins forces with a woman who seems darn resourceful. She’s managed to resurrect an old ship – the USS Franklin, and she has many reasons to seek revenge against Krall.  So, as the Star Trek cast slowly work their magic – communicate, reinvent, and reinforce friendships, we’re along for the ride.

Strap in and turn on your phasers for a fun journey. Star Trek Beyond is a solid summer movie adventure into space – the final frontier.  Live long and prosper
Posted by Joanne at 6:00 AM