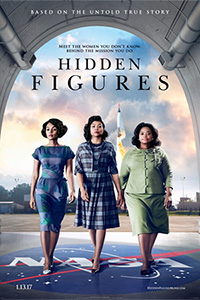 Katherine Johnson, Dorothy Vaughn, and Mary Jackson. Those are names we should know and revere. Instead we know the women who play them in Hidden Figures – Taraji P. Henson, Octavia Spencer, and Janelle Monae (acting kudos to all). This is a must-see film about African American women living in 1961 segregated Virginia – not just any women,  but women with amazing mathematical and engineering minds who helped NASA get John Glenn to the moon.

This is a dazzling film that yes, presents history, portrays the reality of segregation – i.e. there were no colored women bathrooms on the east side of the NASA campus. Katherine had to hoof it in heels  over a mile to use the “proper” facility. Her boss Jim finally asks, “Where are you for forty minutes at a time?” When she explains, it’s like a light bulb goes on. Mary has to petition a court for the right to attend engineering master classes at the “all white” high school – a very smart judge approves it. Dorothy sees the future and gets a book on Fortran programming from the “white’s only” section of the library. So many small things could impede these women. But they persevered in their jobs, knowing they were right

Yes, the story is about roadblocks and obstacles and challenges. The Russians beat America to space. Now it was a race against time and numbers are key. A roomful of white guys in white shirts don’t know the analytical geometry necessary to head for the stars. In comes Katherine, requisitioned from the colored computing group.  As she writes out formulas on the blackboard it is clear – numbers matter, not her color, not her gender. The math is key and John Glenn trusts her numbers over the newfangled IBM computer.

This film has spirit. It soars and the spirit of effort and brains is contagious. Hidden Figures is SO good on so many levels and it’s awesome that this story is being told, these women are being honored,  and that you have a film a whole family can see and appreciate. Math can be exciting, and yes nowadays computers are necessary, but you still have a human brain daring to dream.