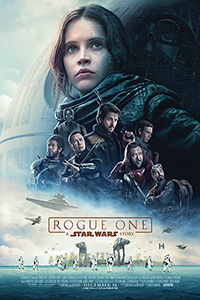 Rogue One: A Star Wars Story was the BIG end of year movie and it lived up to hype and expectations.  I’ll be honest. I am not a Star Wars fanatic and cannot discuss every piece of minutiae about the movies. I don’t even know the proper order to watch everything. However, sources tell me this is an early iteration to prep you for early episodes. Does that help?

We first meet a family who’s been hiding out, off the radar until the storm troopers crash their pad. They want the key scientist to come work on the Death Star. We know this is trouble, but at least the little girl escapes. Flash forward to Felicity Jones, Jyn Erso, who’s a grown up rebel. She’s used by Diego Luna (Cassian) to make contact with Forest Whitaker (Saw Gerrara) who raised her. Altogether the goal is to thwart Ben Mendelsohn (Orson) and the General from making the Death Star (i.e. the planet killer).  My synopsis is weak because it’s all rather convoluted as to who is who and why the why.

BUT, the film is quite amazing. The worlds created are fantastic. The effects are stunning. The John Williams score soars. And Felicity is stellar. We love a good heroine and she sets a great example. Basic plot summation – rebels are awesome. Leaders are evil and bad.  There’s humor, drama, worry, sorrow – every human emotion possible amidst a lot of techno gibberish.  And yes, we get a hologram effect of early Princess Leia (the late Carrie Fisher) – rather poignant as she discusses HOPE.

The Star Wars series is like no other – it truly explores the human spirit and the glory of filmmaking. It’s not too late to see Rogue One on the big screen. I highly recommend you go…now. C’mon, it’s winter, it’s cold, you aren’t doing anything…go support your local theater. Trust me.