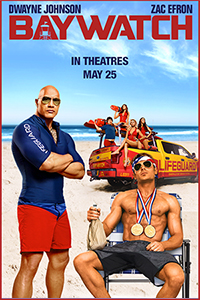 Baywatch is truly silly with no redeeming value whatsoever. As long as you know that going in, you’ll be amused. We were. We paid for cheap tickets - $5 each and chortled throughout. Consider the source material – the television show was rather stupid. So, Mitch (Dwayne Johnson) is head lifeguard and takes his job very seriously. No fooling around. It’s time to get some new recruits and he’s not happy that a new guy is being shoved down his throat. Matt Brody (Zac Efron) is an Olympic gold medalist who’s now doing community service. He’s a pretty boy hotshot with attitude. Gee, do you think he’ll get his comeuppance?

It takes a bit, but Matt slowly learns that  there’s more to lifeguarding than getting a tan. Especially if our gorgeous villain, Priyanka Chopra is trying to take over all of the real estate. And for what reason other than drug smuggling. Mitch and his team are focused on bringing her down. But the local cop, the local councilman, etc all seem to be blocking him at every turn. But no one stops The Rock.

Muscles, swimsuits, young ladies in slow motion, the one “fatter dude” as comic foil – there’s every stereotype in the book for a summer movie based on a tv series. C’mon. But Johnson and Efron have good chemistry with zinger lines. The girls are pretty, Zac is pretty, and Johnson exudes comic charm. It’s just stupid FUN.  Hang on for the Hasselhoff appearance, and the Pamela Anderson sighting. Wink. Wink.  Plus some funny blooper scenes during the credits. Summer movie season has begun with a splash.