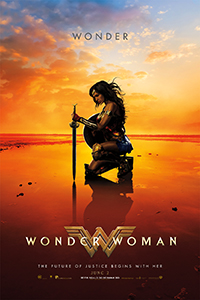 Gal Gadot absolutely leaps from the screen. She is stunning, smart, and is the perfect Diana/Wonder Woman. I loved this movie. It is sharp, slick, moves along with an actual plot, is visually arresting, and Wonder Woman has a lot of character.  Am I gushing? Sure. So many of the Marvel and DC Comic movies are over-the-top fights moving to more over-the-top fights. Sometimes it’s too big of an assault to the senses.  (I like the films, don’t get me wrong, but…)

Wonder Woman has better pacing as an origin story.  We meet young Diana as a girl living with the Amazons on a shrouded island. This place filled with strong women is idyllic and yet prepared for the worst. Unfortunately, Chris Pine as Captain Steve Trevor, pilot in WWI, crashes into the nearby waters. Diana saves him and the island is invaded by German soldiers. Needless to say, Diana saves her people, unleashing more powers than she ever knew she had. She is special and in her naïve way, wants to find Ares – the God of War – to stop this mess. Trevor is a spy who needs to escape and get back to England. Diana says farewell to her world, she’s destined for bigger things, and joins Trevor on his mission.

Once in England, this Amazon fish out of water proves resourceful. Again, Gadot shows trust, heart, and worry – it flashes across her face, even as she’s using her golden lariat, her magnificent sword, and her ever increasing skills. Chris Pine is also quite good with a light comedic touch at times and then true stolid hero bearing. They work together to find the German plant preparing to unleash killer poisons. They find the horrific scientist creating chemical weapons of mass destruction. Oh, there’s plenty of action and blow-em up. But through it all, Diana/Wonder Woman is a towering presence.

Wonder Woman is a winner in so many ways. A strong female heroine with principles and heart. I do believe that Gal Gadot was created from clay and blessed by Zeus. And I look forward to future films from this actress. I want her to save OUR world!
Posted by Joanne at 6:00 AM