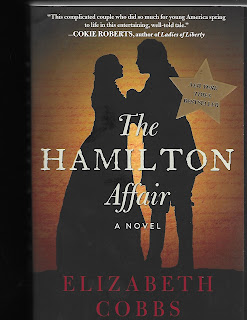 I read The Hamilton Affair by Elizabeth Cobbs with the Broadway soundtrack of Hamilton playing in my head.  This was unfair to the author because I felt like I was getting a rerun of history and it was not to a rap beat. However, Cobbs obviously did plenty of research and she gives a faithful and decent rendering of life highlights in her historical novel on Alexander and Eliza Hamilton.

From the cover blurb – Set against the dramatic backdrop of the American Revolution and featuring a cast of iconic characters such as George Washington, Thomas Jefferson, and the Marquis de Lafayette, the book tells a sweeping, tumultuous true love story of Alexander Hamilton and Elizabeth Schuyler, from tremulous beginning to bittersweet ending – a dueling ground along the Hudson.

From scrappy bastard in St.Croix to the writer of the Federalist Papers and creator of the U.S. Treasury, Alexander Hamilton had a way with big ideas and concepts. He could flourish his quill and also fight on the battlefield. His love of country, his fierce loyalty, and his long abiding faith in independence and democracy allowed him to soar as an American patriot. Oh, he was a man of many flaws (and an affair) too, but his wife, Eliza, remained steadfast and supportive. Aaron Burr shall live in infamy as the man who cut short Hamilton’s life in a famous duel.

The Hamilton Affair is a solid piece of historical fiction.  (The book is cheaper than a Broadway ticket, too) Brush up on your Hamilton lore, be inspired, and don’t waste your shot in life.