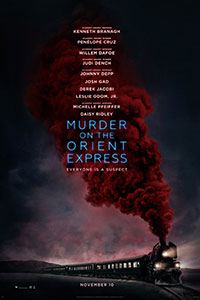 Murder on the Orient Express is a lush remake of an Agatha Christie tale. If you’ve never read her work, I suggest you march to the library and check out one of her books. She was a prolific talented writer with some very defined characters, good plot twists, and that old English humor twinkle in the eye.  So, for this film, there’s a large gathering of seemingly random characters all with a backstory, a reason to be guilty, and a dead body on a train. Whodunit?

I can’t write any more about the plot. You need to go see this movie and watch the twists and turns evolve. Kenneth Brannaugh directed and stars as Hercules Poirot – the most brilliant detective in the world. He’s an extremely fussy, fanatic man with an eye for detail and a mustache that deserves its own Oscar.  Everyone else has their quirks and suspicions. Dame Judi Dench, Michelle Pfeiffer, Johnny Depp, Josh Gad, Derek Jacobi, Penelope Cruz, and more are along for this ride. The scenery is spectacular, the filming works well – at times you feel the confinement and rocking of the train.

Murder on the Orient Express harks back to an old timey flick in a good way. Punch your ticket and go All Aboard for an entertaining two hours.
Posted by Joanne at 6:00 AM