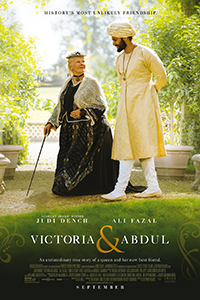 Victoria and Abdul is a British costume drama directed by Stephen Frears. And who better to star as Queen Victoria than Dame Judi Dench?  She’s always so good and indeed commands the screen. We first see her going through lots of dinners and ceremonies for a jubilee celebration. Yawn. She’s bored, old, and tired. Then she perks up. A young humble man (he’s chosen because he is tall) from India (played by Ali Fazal) arrives to present her with a mohur – a ceremonial coin. He dares to look her in the eye and his energy and bearing give her a spark. She commands his presence and eventually gives him the title of Munshi – a teacher. She becomes more interested in India and is keen on learning some language, history, etc.

Slowly, Abdul seems to have too much power over her. Her staff and son (played by Eddie Izzard) conspire to find a fault in Abdul, to find a way to banish him from the court. However, the Queen is feisty and with a twinkle in her eye she does not buckle. She might be short and fat, but she stands tall. The movie is based on old journals found long after Abdul was back in India and died. It’s a unique snippet of history and the movie takes a lot of liberties with the story.

However, for entertainment value, I was amused. I enjoyed Judi Dench’s performance immensely, and Ali Fazal was a worthy foil. Victoria and Abdul is a pleasant way to pass some time and step into a royal setting.