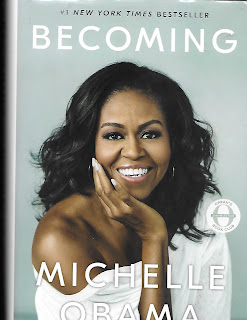 I loved this book.   Becoming by Michelle Obama is well written, thought provoking, and very inspirational. I personally liked her as a First Lady and I now have even more respect for her as a strong woman, a role model, a caring person who has put a lot of thought into her life and is still striving to be awesome.  She has flaws. She has doubts. But she truly CARES.  She truly gave it her all to be a First Lady and to represent for the American people.

Born on the Southside of Chicago to modest folks - her mother worked, her father worked - steady and hard despite having multiple sclerosis. (He set an amazing example for Michelle and her brother and passed very young - a devastating period in her life.). Her parents encouraged education and emphasized that as an African American you had to work twice as hard and never give up. Michelle took this advice to heart - and as an African American woman, she had to work triple at times.

Law school, community service, public service - her path varied, but ultimately landed on helping people. Meeting Barak Obama proved transforming - he was a yin to her yang - and perfectly exasperating at times in every way. She did not want the spotlight, but said yes to his political aspirations. They proved to be quite a team, and a family with daughters Malia and Sasha.  Lots of struggles along the way. Lots of questioning.  This book allows Michelle to explore their lives and give a great deal of insight into struggles, arguments, high and low points.

I bookmarked a ton of pages in Becoming.  Lots to think about.  I'll give you the final lines in the book-
It's not about being perfect. It's not about where you get yourself in the end. There's power in allowing yourself to be known and heard, in owning your unique story, in using your authentic voice. And there's grace in being willing to know and hear others. This, for me, is how we become.
Posted by Joanne at 6:00 AM