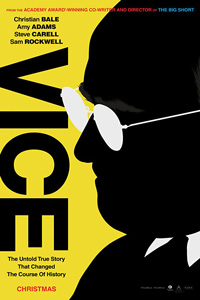 Vice is snarky good fun.  If you liked The Big Short written and directed by Adam McKay, then this film is for you. It’s sharp, clever dialogue and structure cracked me up. Who knew that a film about Dick Cheney could be so amusing?  It’s about an average guy in Wyoming who got a wake-up call from his fiancée – Lynn.  Stop drinking, get your act together, or I’m leaving you. Sure enough, Dick truly got straightened out, went  to school, made connections, and was in the right place at the right time.

Christian Bale gives a genius performance. It’s uncanny. Amy Adams as Lynn is spot on – she’s the Lady Macbeth behind the scenes control. Steve Carell as Rumsfield is a power tool.  And Sam Rockwell as George W. is a bit cliché as the bumbling dude. The movie, from the beginning, is full  of fact and fiction….just roll with it. No matter what, we know what did occur under the Bush presidency, and a whole lot of it was thanks to Vice President Cheney.  This is a movie about power, power grabs, control, and it’s a tad scary as to what did occur – even if it was only fifty percent true.  Crazy times that affect us even today.

But scenes with focus groups manipulating vocabulary. Scenes in regards to the military. Scenes about consolidation of powers.  OMG. It’s sad. It’s a hoot.  I admit I lean left and have despised Cheney. But I had to say “Kudos” to what the man accomplished. And yes, it’s taken with a grain of salt. I like a good chuckle and I laughed out loud a bunch.  I’d say that Christian Bale should start preparing his Oscar speech. Vice is a film. This is NOT a documentary.  It is well done and I’ll use the snarky word again. I like a smart sharp film – this totally entertained.