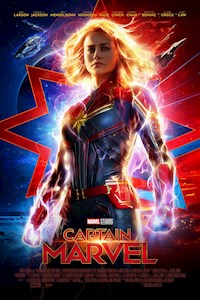 Captain Marvel is marvelous. Brie Larson is marvelous. This is a very fun movie in the whole Marvel universe. It does great back story, pulls in lots of little things for the future, demonstrates some serious woman power, and pretty much kicks butt.  We shall see if Alex Cavanaugh agrees. We tend to give reviews around the same time and I know he was excited for this film.  It totally exceeded my expectations. I was not thrilled by previews, but I like Brie as an actress. She did not let me down.

I will not go into a whole plot line. You would need a power point presentation at this juncture to describe Marvel World.  Let's just say that we do see a CGI young version of Samuel L. Jackson as Nick Fury back when he had two functioning eyes and we see why he ultimately needed a patch. Also Clark Gregg as Colson and how he and Fury worked together. There's a whole Agents of Shield connection.

Ben Mendelsohn is quite good as a Skrull - shape shifting character. Is he good or bad? I wasn't sure at first which way this would go. Also, Annette Bening as Dr. Lawson - WTF - what's the connection?  And the cat Goose?

So many questions. Go see Captain Marvel for answers. You will not be disappointed as this movie kicks off our spring season. It's been a dry spell. Time for some entertainment on the Big Big screen.