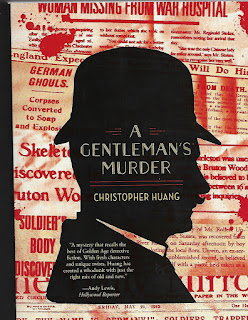 A Gentleman’s Murder by Christopher Huang is an old school mystery set in 1924.  Think wafts of Christie, Chandler, Ellery Queen.  Classy setting in the Britannia Club, but poor Benson’s found dead after a bet. Everyone in the club could be guilty – all are connected fresh from WWI battles and Flanders Field. Many healed at the Sotheby Estate/ war hospital. Some frequented the dens of Limehouse (morphine addiction – not uncommon).

Lieutenant Eric Peterkin (of the Peterkin nobility) has his work cut out for him – his esteemed father and forebears set standards for the club. However, his father did marry a Chinese woman and Eric’s Asian features cannot be disguised. He’s a club member due to history, but his brash youth could be his downfall. He’s an editor of mystery books for a publishing house and can name every plot twist possible. But…there are a lot of unexplained twists and turns to this tale. How is Benson connected to Emily Ang? What of Mrs. Benson – Asian descent? Former nurse at the hospital? Who was last seen with Emily and was it her body found in Bruten Woods? Who took a shot at Eric while he walked home from the club with Mortimer Wolfe? What’s the scoop on the policeman – Patchett?

Huang slowly spools out clues and the nice thing about 1924 – no cell phones, no instant photos. Eric has to do old fashioned foot work, get papers from the library, and actually call on the genteel members at proper visiting hours. There is a certain decorum to these things, after all. A Gentleman’s Murder is a delight to read curled up in a cozy chair with a spot of tea. Hopefully, the fog swirls outside your window, and then finally lifts to reveal the finale. Cheers!