Book Review - The Water is Wide by Pat Conroy 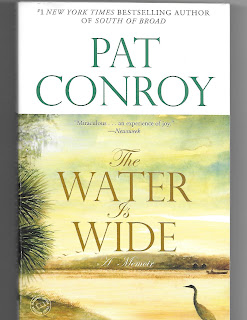 The Water is Wide by Pat Conroy was written in 1972 and it’s a timely read. My book club suggested it and the late Pat Conroy never disappointed. His humor and smooth talking Southern voice drawls from the pages as you turn them. He’s a sharp writer and deft with descriptions and the human narrative. I dare you to read this book and not be touched by his true story.

Cover blurb: The island is nearly deserted, haunting, beautiful. Across a slip of ocean lies South Carolina. But for the handful of families on Yamacraw Island, America is a world away.

Currently, their school has no teacher and looks to the mainland for “volunteers” to give a year of life to live on the island and try to teach these “heathen black kids”. Pat Conroy chooses his calling and climbs aboard the small boat that ferries him to the island. Here’s this white man who’s consciously moved from southern prejudice to teach black kids the ABCs. He’s appalled at what they don’t know. He’s appalled that the members of the school board have given up on these kids. He’s especially appalled at the one black woman who looks down her nose the most at these poor youth.

Oh, it’s a struggle and you will laugh out loud at how he describes some situations. He’s dealing with a lot of traditions, a lot of fears, and he learns quickly who he needs to get on his side (an elder grandmother holds the key). With some acceptance, he can arrange a field trip to the mainland for the kids to experience Halloween. This is a whole new world and requires shoes for some kids.
The poverty is immense. The lack of proper learning is a huge gap. The Water is Wide indeed. But by the end of the book, it looks like Pat Conroy has learned the most, and  gained the respect and touched the lives of kids. Neither party will ever be the same. It’s quite an eye opening education and book to read.