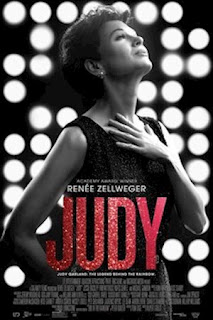 I grew up in a very Judy Garland household. My folks loved her - dad had the albums, they had seen her in concert, etc.  Thus, when my father heard Renee Zellweger was playing Judy Garland in a film called Judy, he was askance. Renee, with squinty eyes, playing Judy....outrage!

Reviews and praise have been high for Judy and Renee, so I had to go see it, admittedly with bias. I'm giving it a B-.  The movie portrays Judy Garland on her last legs - a London show run. She needs money, she wants her kids back (Lorna and Joey Luft), she's living on pills and booze.

She's got a handler in London, a young lady who's job it is to prop Judy up and get her on the stage. Renee does a very good job with Judy Garland mannerisms and tics. Renee can sing decently but lacks that extra tremulous tone. And yes, she has squinty eyes. The film has some flashback scenes showing a young Judy Garland stuck in the Louis B. Mayer studio system. She's considered "fat" and they give her pills to curb appetite, then pills to help her sleep. The poor kid was put in a cycle of destruction. But that voice....that voice brought in the bucks.

Judy is well done enough and kudos to Renee for giving it her all. It's a small "artsy" film. I'm glad I saw it and could discuss it with my Dad. Then I played "Somewhere Over the Rainbow" in tribute.
Posted by Joanne at 6:53 AM