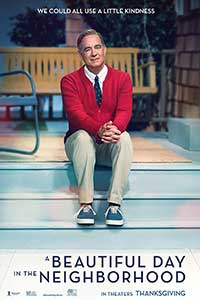 “We can all use a little kindness”.  This is the lead on the movie poster for A Beautiful Day in the Neighborhood and it’s very appropriate for our world today.  Last year’s documentary on Fred Rogers was superb and truly gave us a lot of insight into the man who created Mr. Roger’s Neighborhood. What more needs  to be said? This new movie is based on a true story and is an added bonus salute to the man, the myth, the down to earth hero.

We actually see more of Lloyd (played by a very sincere troubled Matthew Rhys). He’s a journalist who’s known for unearthing the dirt, the real scoop on folks who seem too good to be true. He’s assigned a small (400 word) Esquire Magazine puff piece on Fred Rogers. Lloyd has anger issues from his past and he’s currently a new father, on a new path with his wife (the very intensely good Susan Kelechi Watson). He’s loaded for bear, ready to find the chinks in the Mr. Rogers armor. Instead he’s disarmed by this sweet sincere man (played by our American acting saint Tom Hanks) who seems genuinely interested to know Lloyd. He can’t believe what he’s experiencing. It’s as if he’s on the interview block. Fred Rogers manages to get under his skin, make him question himself, make him face himself.

Mr. Fred Rogers,  as embodied by Tom Hanks is the real deal. He’s no saint. He’s a man. But he’s someone in the moment. He’s someone who genuinely likes people, is interested, and takes the time to truly listen, to truly think, and to truly care – for young and old alike. As we learned from the documentary and we see in this portrayal – he respected children and knew kids deal with very grownup type issues, but in their own way. He guides. He’s there. He pulls you in and you are his neighbor and friend – a word he does not take lightly.

Bring tissues. A Beautiful Day in the Neighborhood is sniffle worthy in a good way. We do need some kindness these days. This is a good family movie for our holiday season.