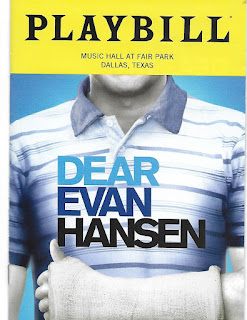 Black Friday - I spent the afternoon at the theater in Dallas - Fair Park Music Hall. The Dallas Musicals presented the touring production of the Tony Award winning Dear Evan Hansen, and it was a treat.

A lonely teenager lies and ups his celebrity quotient in school as the unknown before "best" friend of the kid (Connor Murphy) who committed suicide. But it was his (Evan's) letter, his own cry for help to himself, that the parents think was Connor's last words. In truth, Connor bullied Evan. Evan adored Connor's sister Zoe from afar.

Evan's single mom works a lot and goes to school, and, while she cares deeply, just isn't around much. Connor's folks grab hold of Evan as a conduit to their son's life. Evan hangs on to them as a lifeline of how a family "should" be.

This is a serious, angsty subject dealt with in current form - social media slides on the screen, a spare stage, and melodic tunes with strong lyrics - "When you're falling in a forest and there's nobody around, do you ever really crash, or even make a sound?" The pressure for kids these days is apparent in this very current musical.

I was extremely impressed by the matinee understudy, San Primack. His voice was clear as a bell. Everyone was quite good and Dear Evan Hansen will stick with you.
Posted by Joanne at 6:00 AM