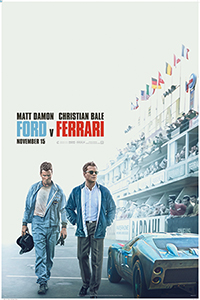 Strap in. Put your helmet on and gird your loins. Ford v Ferrari is an A-rated movie with a  lot of zoom.

Henry Ford II (the incomparable Tracy Letts) has been insulted by Enzo Ferrari and he’s opened his check book. He wants a Ford race car to win the Le Mans 24 hour race. Who’s the man to do this? Carroll Shelby (perfect performance by a spot on Matt Damon) is a racing genius. He won the Le Mans. He designs cars. He has a vision. Who can drive a winning car? Shelby vouches for the “difficult” Limey  -Ken Miles (another genius role done by Christian Bale). Miles breathes the air of racing. He can sense one tic, one engine miss, one esoteric nuance that embodies a vehicle.

But within Ford you have the suits and Josh Lucas plays the biggest jerk of all. He wants the marketing power,  he wants the limelight. Shelby says this can’t be done by committee and he takes Henry Ford II for the ride of his life. The man is crying and gives carte blanche. Miles wins races and proves he’s worthy of being on the team. Shelby keeps him reigned in just enough.  The movie keeps us on edge with lots of oomph as we enter Le Mans.

Ford v Ferrari is really good and you don’t have to know or care about racing. It’s about art vs. commerce, devotion vs. cynicism, inspiration vs. deadness, and it involves some crazy. Men who can’t help but be outside the box with a passion. And wow – the acting chemistry works. The cinematography works. Your heart will accelerate as Miles shifts through some nutso driving. And you’ll root for Ford Motor Company (America!) to win the darn race.

It’s holiday movie season and this one is a winner. Zoom Zoom