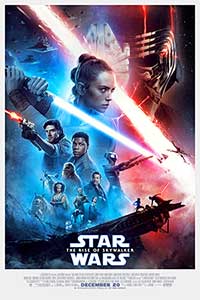 Ray and I joined the hordes at the movies this weekend to see the “final” episode in the Star Wars Saga – Rise of Skywalker.  It is very entertaining, well done, and lots of special effects. I’m not a fanatic and was late to the whole party. I don’t know that I’ve seen every episode. But, I enjoy the general theme – underdogs fighting the empire. Underdogs seeking truth, justice, freedom, and  caring for humanity. What’s not to like?

Acting is good and Daisy Ridley as Rey kicks butt. Always poignant to see ghostly Mark Hamill as Luke, ghostly Harrison Ford as Han Solo, and the late Carrie Fisher as Princess Leia – still a leader, still the one all look to. Whatever footage they had of her, they blended well and it works.  Adam Driver is great as Kylo Ren/Ben  - evil force trying to get Rey to join him on the Dark Side. Will he win, will she crater? Po, Finn, et  al – can they fly and fight for victory. Creepy Emperor Paletine – how’s he still hooked to machines and pulling strings?

I won’t give away big reveals – who’s really related to whom? Say what?!!!  I think there are still questions that true fans must ponder. I need  to ask my guys at work for some clarification.  But I could roll with it all and be entertained. And frankly when the John Williams Star Wars theme music swells, I can feel the exhilaration – you just know something cool is going to happen on the big screen regarding a galaxy far, far away.  And that’s what movies should do – transform and send you to another realm for a few hours. We, in the full theater, were united and rooting for our scrappy resistance fighters.
Jedis  - light sabers ready…. And go!