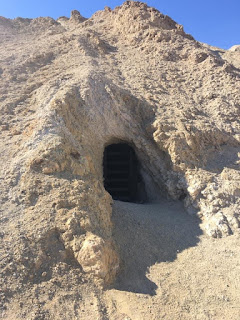 Should have written a post last night, but meh - didn't have a good idea. A bit of a dark cave, black hole, meh.   (This pic is courtesy of a cousin - they are off hiking in Death Valley - and having tremendous weather)

Streaming - started Season 4 of The Crown last night. Jolly good stuff. Margaret Thatcher (Gillian Anderson) just came aboard as the new Prime Minister. She was invited out to the castle in Scotland to muck about. Not her cup of tea - I was amused. And Charles has just met Diana, so that shall be interesting. Plus the I.R.A is bombing a bunch. So in general, the United Kingdom isn't all crumpets. We'll see what the Queen chooses to do. Olivia Coleman is such a good actress.

Good book - Homefront by Kristin Hannah. Jolene is a mother and a Black Hawk helicopter pilot. The Guard calls her up to deploy much to the distress of husband, Michael. The couple were headed toward divorce, but duty calls on all sides. Betsy is 13, Lulu is 4. Tough family times. Then it becomes even more troubled. Jolene's helicopter takes fire, crashes, she loses her leg, her best friend and co-pilot, Tami, dies. Coming home is not a smooth transition. Homefront depicts the drama of loss, family issues, depression, PTSD, and more. Well written and poignant. Have a tissue ready - sniffle.

And there's a post. I'm not still sitting in a cave.

Good luck with your Monday. I'm off to work.