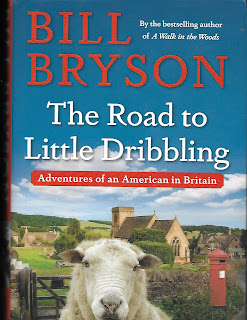 If you want a very humorous read and a nice escape, read The Road to Little Dribbling by Bill Bryson. An American from Iowa, he lives in England with his wife, and this is his second homage to a beloved country. He's very funny and has a way with words. Plenty of walks, a few train rides, and time in the car lead him from Bognor Regis in the south to Cape Wrath in the north.

Gardens, museums, bars, and small towns - he wanders down plenty of paths many of us would miss. His droll observations are a hoot.  p. 119  "I have never assumed that anything is fun just because it looks like the English are enjoying themselves doing it."  (This was in reference to a bitterly cold day at a beach).

p.222  He talks about the train game at Cambridge station. He calls it - does the train really terminate here? A train stops, but is it really done or will it go on to London? The signs are not giving a clue. "Eventually a few brave souls got on, and then there was a kind of rush like when they opened up the Oklahoma Territory to settlers, as nearly everyone hurried to get a seat. But we all had to remain poised to jump off again."

I chuckled my way through this book (it was published in 2015), and shall use it as a travel guide someday. Every place sounded delightful, and Bryson absolutely gushes over the English countryside.

I'm ready for a long stroll and then a stop for some tea or a pint.  Cheers, mates on a Wednesday.