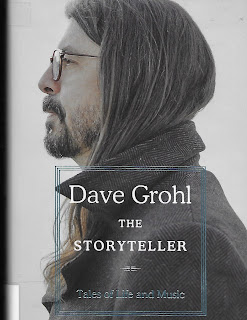 Dave Grohl, The Storyteller - Tales of Life and Music is a joy to read. I've seen him on some interview shows and he's an entertaining, energetic man. I've always liked him in the Foo Fighters. I wasn't keen on Nirvana. In general, a lot of his music is not in my wheelhouse. BUT - the sheer enthusiasm he has in music and life makes for a wonderful memoir.

This book reads like he is hanging out on your patio, drinking a beer (or two or many) and just chatting. It goes back and forth from childhood to present day, as he recounts his life in music. Drumming was in his bones - even when he was beating on a pillow. He memorized music and played along to beats in his head. Never great at school, a pivotal life choice was dropping out and joining the band Scream on tour. From there he never looked back, except when he was starving and tired and questioning himself.

Dave Grohl oozes honesty in this tale of music and his life. He doesn't back down from questionable decisions or reflect on some stuff that could have gone differently. He is a family man now and his heart is on his sleeve when it comes to his mother (he's very close), his wife and girls. He basks in his luck and is in awe of some choices he made, some people he met, and the sheer drama that is life.

Cool dude, that's all I can say. Great sense of humor. He's a Foo Fighter, a husband, and a man who loves life. I highly recommend his book, Dave Grohl, The Storyteller.