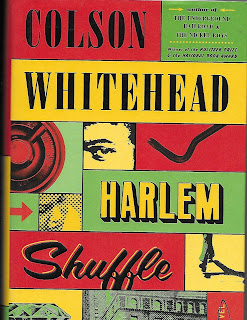 If you are still shopping for a great gift, here is a super read - Harlem Shuffle by Colson Whitehead.

I love this man's writing, and now he's written a hilarious novel of heists, shakedowns, and rip-offs set in Harlem in the 1960s.  (cover blurb)

Great opening line    Ray Carney was only slightly bent even when it came to being crooked...

Ray sells furniture, makes a decent living, loves his family. But few people know he descends from a line of uptown hoods and crooks, and that his facade of normalcy has more than a few cracks in it. (cover blurb)

Ray gets pulled into a deal with his ne-er do well cousin Freddie. He senses this is going to blow up, and yet he could use some cash. Ray the striver versus Ray the crook. It's a double life and you are going along for the ride uptown and downtown, as Ray maneuvers between shady cops, local gangsters, two-bit pornographers, and a Harlem backdrop.

Great writing. Rich characters. Humor. Hubris. Harlem.  Colson Whitehead with Harlem Shuffle has pulled off another winner.   p. 244 One thing I've learned in my job is that life is cheap, and when things start getting expensive, it gets cheaper still.