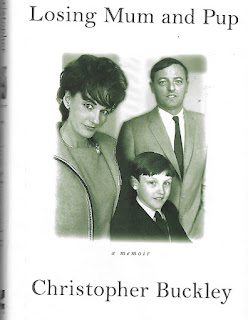 Oscar Wilde wrote, "To lose one parent may be regarded as a misfortune. To lose both looks like  carelessness."

cover blurb:  12 months within 2007 to 2008, author Christopher Buckley coped with the passing of his dad, William F. Buckley, the father of the modern conservative movement, and his mother, Patricia Taylor Buckley, one of New York's most glamorous and colorful socialites. He was their only child and their relationship was close and complicated. As Buckley writes: "They were not - with respect  to every other set of loving, wonderful parents in the world - your typical mom and dad."

This book Losing Mum and Pup is entertaining and touching as Buckley reels from becoming a fifty-five year old orphan. I found this book fascinating and heartwarming. Buckley's love for his folks shine through as well as his exasperation in telling their family story. Disagreements aplenty, disapproval abounds for the far more liberal son. And yet, there are so many human down to earth moments all amidst a backdrop of money and fame.

Christopher Buckley's consolation, wit, and warmth give some solace and insight into dealing with the death of a parent. This was a very pleasant memoir to read. Have a tissue handy for some very touching moments.