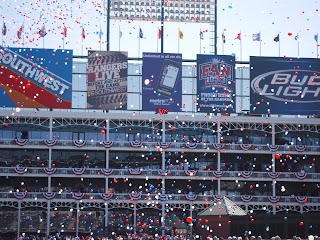 Rangers are officially in first place. Yes, it was opening day at the Ballpark in Arlington. A brisk morning temperature of 38 degrees warmed up to mid 50s for the afternoon. Clear blue skies and wacky winds blew balloons everywhere. This blog has not turned into a sports column. Never fear. However, this is one heck of a sports week in Texas, so might as well tune in and enjoy some fresh material. My favorite quote from the crowd - "Hey Coke guy...where's the beer guy?" Surely there's a haiku hiding in my notes. 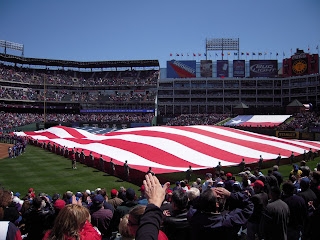 Perky patriotic music provided by the 4th Infantry Military Band and all of these flag handlers were from an Army unit based in Killeen - back from a 15th month tour in Iraq. Their families basked in a warm welcome and hearty huzzahs from the crowd. 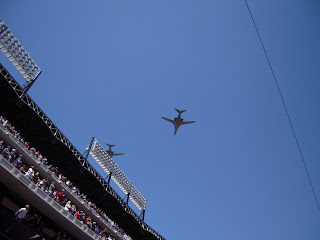 Nothing like a flyover. Yes, huge amounts of tax payer money at work...but it is still damn cool to see. These planes were from Dyess AFB, San Antonio. Former President George W.Bush threw out the first pitch - a strike, and the game was ON. 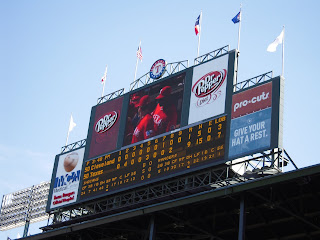 Forget NASCAR vampires (previous blog entry). How about Aliens Abduct the Texas Rangers and turn them into a winning team?
Final score 9-1. Kevin Millwood was the winning pitcher of note. Guess he didn't get the memo that he's on Ray's fantasy baseball team - the Stray Bats. Truly, that has to be a title of one of my books someday.
Joanne