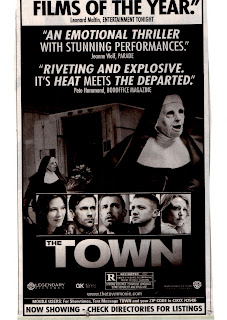 The Town is a gritty tale of bank robbers in the poor section of Boston called Charlestown. It's where friends don't rat out friends, where you pay off the local florist who coordinates gigs, and where there's not much hope of NOT going to prison someday. Ben Affleck stars in and directs the movie with aplomb. The characters, dialogue, and action are down and dirty and real. Huge thumbs up to a great movie for the fall season. Oscar buzz begins.

Ben plays Doug, a two bit criminal looking to get out. But jobs keep coming and he's the leader. His partner, Jim (played by a twitchy Jeremy Renner) is a time bomb himself, ready to scrap or pull a gun anytime. The crew have the timing down, masks, inside knowledge, and multiple staged getaway cars for bank robberies. But one goes wrong and the gang end up taking Clare, the bank manager (Rebecca Hall), hostage. She does get released, but she's the one connection that could blow the cover. So, Doug's in charge of checking on her, seeing if she remembers anything, and of course, he falls for her. She's smart, educated, from the right side of the tracks, and her innocence is refreshing. He's captivated, smitten, and he can see a hopeful future, possibly with her in it.

Meanwhile, the FBI, lead by Jon Hamm (perfect casting - strong, good looking, and righteous) is closing in on these punks. It's exciting to watch the group dare the FBI to nab them. Superb small character scenes, thrilling car chases, scary gun battles, and the underlying tone of family/friends/loyalty all creates a smart film. Ben Affleck directed Gone, Baby, Gone - an excellent first film. The Town, his sophomore effort, raises the bar.

September entertainment - you can't watch football all the time. Get out of the house and go see The Town.
Posted by Joanne at 4:21 PM