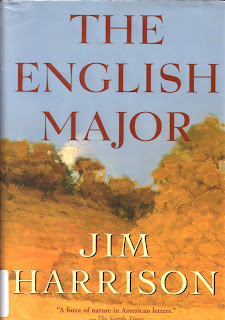 Road trip novels can be really good or prove ponderous, however, The English Major is witty insight into a sixty-year old man who's "lost" his wife, his farm, and his purpose. Spurred by a childhood jigsaw puzzle of the United States, Cliff roams the West, rediscovers himself, and reflects on his past loves and life.

To attempt to be a good writer, one must read and I read in all genres and styles. I peruse library shelves and titles catch my eye. I pull the book out, read the blurb, and either keep or reject. Some authors are known and I have faith in their writing based on history. Book reviews are a wealth of opinion and often I'll remember thinking, "That sounded intriguing." The English Major was a found gem.

Jim Harrison's voice is strong and his humor heightens the book's charm. Cliff taught English, and then turned to farming. This foray is interesting as he considers his joys and tries to overcome early to rise habits. On his road trip, he flings puzzle pieces out the window, or buries them symbolically, as he crosses state lines.

Cliff's ties to his son, Robert, in California, and almost ex-wife, Vivian, in Michigan, are intertwined with his current (annoying) accessory, former student Marybelle. Sex, lust, and abandonment are explored. Cliff teeters between alcohol binges and sobering observations through Idaho, Montana, CA, Arizona, and his true love, Michigan.

Here's an example of Harrison's smooth writing on page 189: As an English major I was familiar with the stories of dozens of writers trying to get their work done amid the multifarious diversions of the world and the hurdles of their own vices. A professor had said what saves writers, is that they, like politicians, had the illusion of destiny, which allowed them to overcome obstacles no matter how nominal their work.

Meander with Cliff and enjoy the road (life) trip that is The English Major.
Posted by Joanne at 8:37 AM