Poems and Finance Do Mix 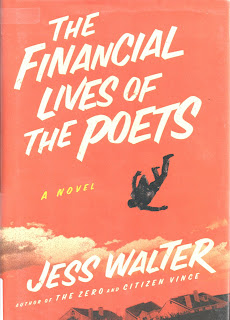 Matthew Prior specialized in finance journalism, then quit his job to to start a business - poetfolio.com. The idea was to give business news on the internet in blank verse. Unconventional, amusing (to Matt), and all in all, a huge bust. By the time he figured out his mistake, his wife was having spending issues herself, and between the two of them they were digging a financial grave.

The Financial Lives of the Poets by Jess Walter appears grim, but actually this book is a hilarious read. It is the story of a man's recognition of his rocky marriage, his attempt to sabotage his wife's affair, his struggle to gain employment (without groveling) - all through a newly found (by accident) marijuana haze, and the possibility of using drug trade to get back on track. (Again, not necessarily the wisest choice).

Jess Walter has written a timely book with an ear for snappy dialogue, clever inner dialogue, and bad verse that's funny good. I snickered to myself at Matt's encounters with Richard, his terrible financial planner, and with Skeet and Dave, the drug dealer connections. Mr. Walter shows how bad decisions can lead to even worse decisions by folks who never thought they'd be in a mess. Matt and Lisa had plotted a regular middle class life course, but they got waylaid. Again, while the book presents serious issues, it is a well-paced humorous down-to-earth, trudging to 7-11 to get milk at midnight read. (And yes, trouble does happen after midnight).

Page 290 Matt's summarizing a bit and it's so true: But it's not easy, realizing how we fucked it all up. And that turns out to be the hardest thing to live with, not the regret or the fear, but the realization that the edge is so close to where we live.

I recommend The Financial Lives of the Poets for the writing, the humor, and, sure, I have to admire the thrown in poetry and occasional haiku. Poems, Finance, and a well drawn character do mix.
Posted by Joanne at 8:50 AM