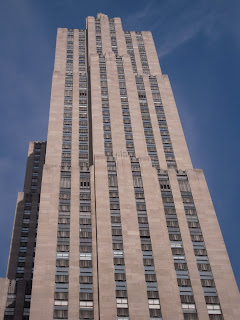 30Rock is truly a location - Rockefeller Plaza, where broadcasting decisions are made daily. The fall television season is gearing up and I'm sure I'll log plenty of time in front of the tube. However, I'm pickier about shows and I notice writer credits. Writers have immense power, and fortunately actors recognize this fact and tend to thank writers when they win awards. Writers have the power to kill. 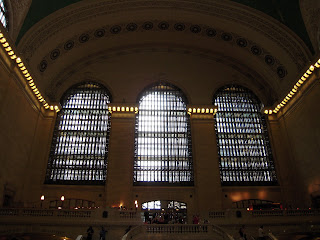 (WSJ - 8/30/10 p. W1) featured an article about death in prime time. Writers possess a little talked about power: the written word as a way to settle scores, keep high maintenance actors in line, and poke fun at anyone who gave them a hard time in junior high. How true. I've dug deep and used an old nemesis as fodder for a murder in a short story. Or I can make myself the heroine who arrives at Grand Central Station (see above pic) and is discovered as she alights from the train. 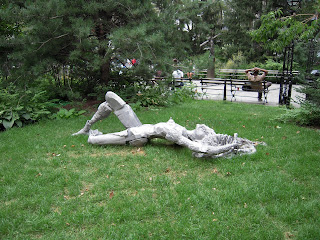 Actor Ed O'Neill (Modern Family) said, "Crossing a TV writer is suicide. I've heard many stories of someone getting brutally murdered on a show because they insisted on a bigger trailer." Or writer Steven Bochco said actors have complained that they would never say something. His response is, "Maybe you wouldn't say it, but your character will. He's my character and he's saying it right here." Mr. Bochco points to the script.
I didn't know that I possessed so much power at my fingertips. But as I type this, I realize I can indeed cause enemies to die, cause fiscal harm to old bosses, and resolve unrequited love. All it takes is imagination, and an underlying backbone of repressed stories. 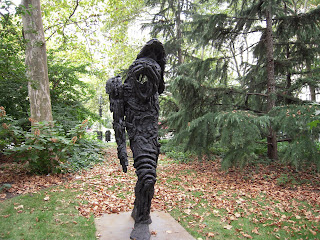 So yes, I write works of fiction. Any character living or dead is a creation. Any resemblance to reality is mere coincidence. Or as Mike Barker (co-creater of American Dad) says, " We're all writers. If we weren't cowards, we'd be actors." (WSJ p.W2)