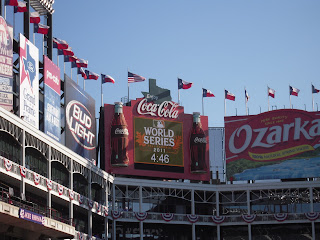 Game 5 2011 World Series. Rangers Ballpark in Arlington Texas. Rangers versus Cardinals. Series tied 2-2. This is a huge game, the final one in Arlington. The stadium is a sea of red. The crowd is loud. Palpable energy. To be good, you've gotta have a lot of little boy in you. Roy Campanella. 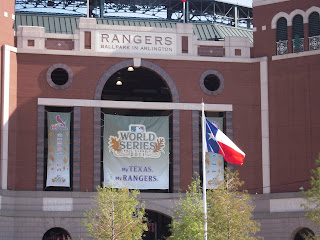 Good pitching will always stop good hitting and vice-versa. Casey Stengel. St. Louis was up 2-0 and the crowd noise diminished. Then Ranger bats heated up, silly mistakes were corrected, pitching held it together. Talk about ratcheting tension. The plot thickened and Rangers leaped ahead 4 - 2.

Most ball games are lost, not won - Casey Stengel. Have to say, the Rangers held it together, and the Cards made some dubious moves. 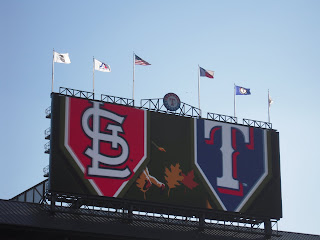 Everyone on their feet. Towels waving, hands clapping, cheers and groans. World Series baseball is a whole 'nother beast. 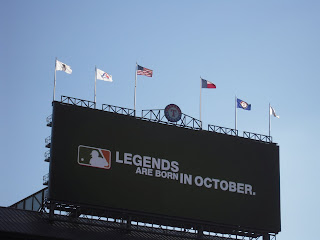 It's the Year of the Napoli. Mike Napoli, Ranger catcher, has done everything right. Big loud home runs, zooming pick-off throws. The stadium's collective chant Napoli, Napoli, Napoli sums it up. The man behind me wore a t-shirt, ...and they lived Napoli ever after ... Let's hope that's true for the Texas Rangers as they head to St.Louis for Game 6 on Wednesday. Up 3 -2 in a best of 7 series. Drama, tension, and characters. Baseball literature is alive.