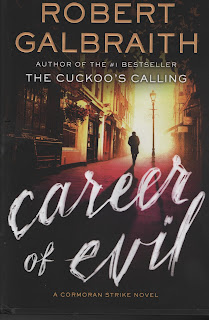 JK Rowling, writing as Robert Galbraith, is so darn good. I’ve featured her first two novels – The Cuckoo’s Calling and The Silkworm – and now she’s back with Career in Evil.  I think this is the best Cormoran Strike book yet.
From the cover blurb – When a mysterious package is delivered to Robin Ellacott, she is horrified to discover that it contains a woman’s severed leg. Her boss, detective Cormoran Strike, is less surprised but no less alarmed. There are four people from his past who he thinks could be responsible – and Strike knows that any one of them is capable of sustained and unspeakable brutality.

Yowza – now that will make you turn pages.

Indeed, the book progresses with some grisly murders. It’s obvious a serial murderer is on the loose. Cormoran and Robin are under police surveillance. They, in turn, are doing their own investigative work. Meanwhile, chapters offer up the killer’s viewpoint and as the reader, we have no idea who this is.  We are as stumped as Robin and Strike.  Meanwhile, Robin is maybe getting married, maybe not. Trying to maintain a relationship is very tough in this business. And at one point, Robin and Strike are at odds – now that makes it tough for the reader. We root for both of them – they are our constant.

Cover blurb – A fiendishly clever mystery with unexpected twists around every corner, Career of Evil is also a gripping story of a man and a woman at a crossroads in their personal and professional lives.

I love JK Rowling. She truly is a superb writer with a clever imagination and a gift for rich descriptions and characters. This is her best mystery yet and kept me guessing until the very end. Turn on all the lights, snuggle under an afghan and treat yourself to a great read.