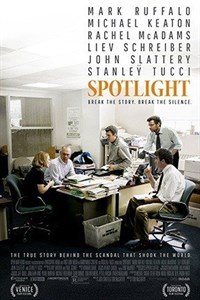 Spotlight is fast paced and tells quite a tale based on true events. I’ve always liked a “hold the presses” movie and this is old fashioned news beat story telling. Back in 2001, the Boston Globe’s special news team – Spotlight- started researching information on priest abuse. The numbers grew and they realized they had more than a few priests involved – this was a whole system of lies. Interviews, knocking on doors, confirmation of names, and more research yielded an amazing sad expose of lives forever affected due to the trust given to the Catholic church.

Tight film making and great acting gives Spotlight a classy edge.  Michael Keaton is the editor raised in Boston and entrenched in the parish affected. Liev Schreiber is the new comer to the area who questions the fiber of the system. Mark Ruffalo and Rachel McAdams are the boots on the ground researchers, digging ever deeper and getting the necessary interviews to confirm the pain and suffering of former altar boys. Stanley Tucci plays the lawyer who’s been fighting the church for a long time. The cast interaction heightens the drama and sense of urgency to the story.

Oscar buzz surrounds this film and it’s a worthy contender. If you want a well done, smart film experience, then train your eyes on Spotlight.