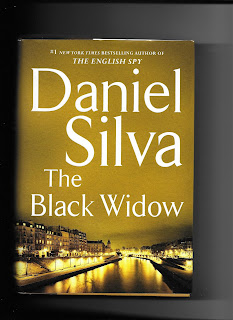 Daniel Silva’s The Black Widow is one of the best, I think, in his Gabriel Allon series. From start to finish it will keep you turning pages and also marveling at the author’s skill in capturing our dangerous world today. It’s almost ripped from the headlines authentic or will be soon. Silva definitely does his research and must talk to folks in high places. Very impressive.

Gabriel Allon is an art restorer by trade, but also a legendary spy for “The Office”, Israel’s premier group. As Allon is about to become the new chief, he’s back into the field for an operation. ISIS detonated a bomb in Paris, and one man’s name keeps appearing – Saladin. How to find him? How to get into the network? Gabriel taps an extraordinary woman – a doctor, a Jew, and a woman willing to take the risk to don the clothes and persona of a “black widow” – females willing to work for the caliphate, willing to die for ISIS.

As the mission crosses borders into dangerous territory, Natalie must maintain her poise and conviction to fool Saladin and lead Allon and crew to a fateful night. This is tick-tock watch the clock on your bomb vest nerves on edge writing. Forget your nightly news. Delve into The Black Widow as an alternative. The world is scary. We have to root and support the good guys. Enjoy a gutsy read.