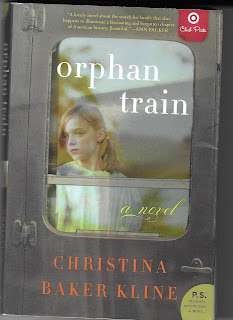 Who knew?  From 1854 to 1929 trains ran from the East Coast to the Midwest with orphan kids. They were sent out to be adopted by farming families. In theory it was the “Christian” thing to do. But stories vary  - some kids were chosen by kind folks and others were adopted to be “slaves”.  The author, Christina Baker Kline, of Orphan Train did research and created her story from her discoveries.  This is an excellent read. Well written and thought provoking, I was very interested in her characters and tale.

In current times, a high school student in  trouble, Molly, needs a community service project. She is paired with an elderly widow, Vivian, to help clean out her attic.  In sorting out keepsakes, a story comes to life. Vivian, as she’s known now, was an Irish immigrant to New York City and was ultimately sent on the orphan train to a new home. Her red hair and age made her undesirable and she survived several horrible transitions before finally being adopted by a nice storekeeper. Now she lives in Maine in a lovely home, seemingly from money.

Molly is a Penobscot Indian who’s been in and out of foster homes. She assumes Vivian was born to wealth. There are a lot of assumptions and the truth in this small Maine town is discovered by both Vivian and Molly.  I liked the give and take in this book.  Each chapter opens more doors into Vivian’s story and Molly’s realization.  The lesson to be learned is the old adage “don’t judge a book by its cover”.  Molly and Vivian gain strength from each other and you root for them both for a satisfying ending.

Orphan Train is truly a decent  read passed on from a friend.  Big thumbs up
Posted by Joanne at 6:00 AM