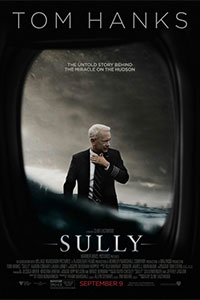 He did his job. That’s how Captain Chesley “Sully” Sullenberger explained his actions when he landed US Airways 1594 in the Hudson on a  January 15th. Tom Hanks is the perfect actor to play Sully – just a straight arrow hard working man with a superb reputation after forty years of flying planes. Sully, the movie, brings his story to the big screen and while you think you know what happened, you’ll still hold on tight as he says “This is your captain. Prepare for impact.”

It was a clear cold day in New York. Snow on the ground, but blue skies for a routine flight to Charlotte. Sully and his second in command (played by the stalwart Aaron Eckhart) board the plane, do the usual checklist, and take off. Then “Birds!” – a whole flock appear and strike the engines. Suddenly it’s not a routine day. Engines are out, power is out and the two experienced pilots remain calm and go into save mode. The flight attendants reassure passengers as they too wonder what’s happening. Keep your seat belts fastened and ultimately brace for impact. Sully turns on auxiliary power. He contacts the tower with a Mayday and considers his options – return to La Guardia? Aim for Newark? Go to Teetleboro NJ?  Swift decisions and calculations make those impossible. Sully is headed to the Hudson for a water landing. And he lands and New York water taxis, police responders, etc all converge to rescue 155 souls. No one dies, no one is lost. They are cold, wet, scared, and grateful for a coolheaded captain.  Wow

The movie goes back and forth between what occurred and the investigation into the landing. Simulations show he should have gone to the airports. But….what about the human calculation? All the engineers and algorithms in the world cannot account for the human factor. Sully, in his 208 seconds, made the right decision. He did his job. And Clint Eastwood does his job as a director to bring this amazing story to life. The acting is superb, the film is tight, and you’ll want to applaud at the end. Sully – a captain to salute.