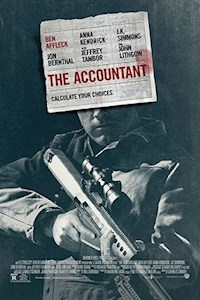 The Accountant is not a sequel to anything. This is awesome news. It’s a fresh independent movie starring Ben Affleck, Anna Kendrick, John Lithgow, and J.K. Simmons. All of these actors are spot on in their roles.

Affleck plays Christian Wolff, a math savant who’s a small town accountant. But behind the scenes, he’s fully armed and dangerous. Video shows him meeting with “bad guys” – he’s the accountant to terrorist stars and J.K. Simmons, a Treasury Department agent about to retire is ready for his last big hurrah. He’s going to catch this guy, get his list, and take them all down. Meanwhile Christian is called into a robotics company run by John Lithgow (always good at being earnest sleazy) . Anna Kendrick was the little whistle blower – saying something wasn’t quite right with the books.  (and she’s very relatable as a “real” employee who’s a bit of a nerd herself)

Lots of math is discussed. Christian, in record time, locates a problem. Anna wonders “Who is this guy?” when she discovers all of his guns and his art work (he has a Jackson Pollock on a ceiling). The cat and mouse game is amusing to watch – Affleck, Simmons, and Lithgow.

You have to suspend some belief and just go with the flow in this film. I’m not going to explain more, and indeed the film can be a tad talkie. But the premise is intriguing and Affleck pulls off a unique character. He’s managed to learn to work in the real world, and yet he has to keep his own boundaries to make that work.

The Accountant has action, intrigue, and math.  Somehow they all add up to a worthy flick for adults.