Book Review - A Life in Parts by Bryan Cranston 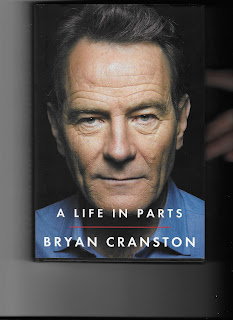 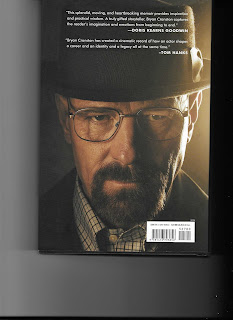 Bryan Cranston A Life in Parts is not a celebrity biography. Yes, he hit it “big” with  Breaking Bad, but the man paid his dues, worked hard, and has a life to discuss in his memoir.  He’s a fine thoughtful writer and this book is excellent. This is a man you’d like to meet and have dinner with knowing there would be engaging conversation and a real person give and take. He acted at age seven in a United Way commercial with his father and had the bug. His dad was an actor, but the man disappeared and Bryan had to figure out life as a man on his own. He shared a lot with his older brother and younger sister, and dealt with a mother who became an alcoholic.

But no excuses. Cranston shares his “zigzag journey as an abandoned son to beloved star by recalling the many odd parts he played in his real life – paperboy, farmhand, security guard, dating consultant, murder suspect, dock loader, lover, husband, father.” (cover blurb). He does not shy away from any aspect of his life that led him to where he is today. As an observer of life, he honed his craft with hard work and truly studied and worked at the idea of “craft”.

After years in the business, he created the bumbling dad character of Malcolm in the Middle. Cherished years and a lot of improv joy on set.  Then because of a brief role on the X-Files and his time with Vince Gaffigan, he managed to become Walter White on Breaking Bad. Extensive chapters are spent on this special alchemy. It’s quite interesting and you’ll be an even bigger fan when you read his thoughts on the part.

Finally, he’s never finished growing and exploring. He conquers the stage with a Tony award winning performance in All the Way as LBJ – a larger than life figure.  Bryan Cranston continues to grow as a person. When I finished his book, I was ready to read more – to see where his life takes him and I look forward to more deep characters and great acting to come.  A Life in Parts – oh, so many more parts to choose from and enjoy.  Just a darn cool man.
Posted by Joanne at 6:00 AM