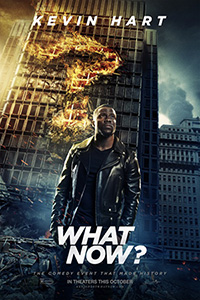 Kevin Hart, the hardest working comedian on the planet, has a concert film out in theaters.  What Now? Is an enjoyable frenetic experience.  Basically Kevin asks “What Now?” because as he conquers arenas, stages, movies, and more, people are asking for more and he asks himself for more. The man never quits. This film covers his record breaking sold out show at Lincoln Financial Field in his home town of Philadelphia. This is a football stadium filled to the brim with adoring fans screaming for more.

Kevin knows what his audience wants and he gives it to them. He’s a bundle of energy ready to talk about his height challenge, his kids, his upcoming marriage, and the general craziness of the world. He is not political, not topical. He leans toward more general observations of life type of humor and the crowd eggs him on. He does capture the slice of life in a manic way. He’s not as observational as Jerry Seinfeld, but he does niggle on the minutiae of life, and he’s funny.

Oh, the language can be a tad rough – not appropriate for kids – this is R.  And the ninety minute film was plenty long enough. I was amused and then done. But I will concede that the man works hard and truly gives it his all. He’s not coasting. He wants to be mega-successful and he is accomplishing this.  He sets a very good example in this regard – there are no excuses in this world. Get out there and strive for the best you can be. And then ask What Now??