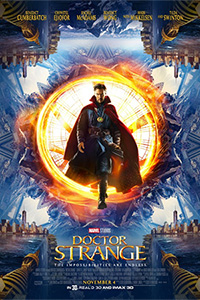 Doctor Strange, the latest Marvel product, is a head trip. Fun, trippy special effects and a crazy plot about time and mind over matter makes this rather cerebral.  Brains over brawn. As Entertainment Weekly points out “it wouldn’t work as well as it does without Benedict Cumberbatch and Tilda Swinton – two actors who in addition to being intelligent, top-shelf stars both project a slightly alien, otherworldly air.”  So true.  They are clever and seductive, giving their characters a lot of depth.

Cumberbatch, as Dr. Stephen Strange is an ego surgeon who’s a charming jerk. Rachel McAdams has the thankless job of fellow doctor/former love interest.  After a horrible car accident, his hands are ruined so he looks for a cure in Nepal. Word has it that there is An Ancient One who can teach one mind control and more. Let the brain do the healing. Swinton is perfect as the mystic. Her right hand man, Mordo (Chiwetel Ejiofor) is the day to day trainer. Soon Strange is moving beyond logic – dimensional portals, teleportation, and more, plus weird facial hair. Meanwhile the dark forces of Kaecilius seeks to destroy the Ancient One, but Doctor Strange, now in his levitation cloak seems to have the upper hand.