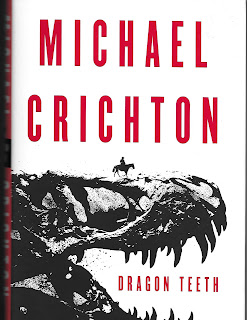 Dragon Teeth by Michael Crichton was discovered after his death. It’s a tad rough around the edges and started a bit slow. But the story kicks into gear and turns into a fun interesting read. It’s a touch of the old west with hints of Jurassic Park to come. Who knew fossil hunting could be so dangerous, rewarding, and thrilling?

William Johnson, a spoiled Yale student, joins a world renowned paleontologist (Marsh) on a summer expedition to the Wild West. But the (cover blurb) paranoid and secretive Marsh becomes convinced that William is spying for his nemesis Cope. He abandons William in Cheyenne, WY, a locus of crime and vice. William joins forces with Cope and stumbles upon a discovery of historic proportions. With this extraordinary treasure comes exceptional danger.

p. 9   You, sir, have made a wager,” I replied. And in that moment I realized that, through no fault of my own, I would now spend the entire summer in some ghastly hot desert in the company of a known lunatic, digging up old bones.
Posted by Joanne at 6:00 AM