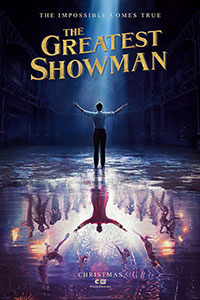 The Greatest Showman refers to P.T. Barnum, but it could also refer to Hugh Jackman, who portrays him in this musical. What can’t Hugh do? He sings, dances, and charms on screen. This is an excellent movie for his talents, and a fun two hours to watch.  Born incredibly poor and unloved, P.T. Barnum vows he’ll be a success someday. His father is a tailor and does work at a fancy estate. That’s where PT falls in love and vows to marry the daughter. He’ll show the father that he can provide. She (Michelle Williams) falls in love with P.T. for his energy, enthusiasm, and his dream. She slogs through as he loses job after job. The family is happy.

Then he buys a museum of oddities. He sees potential. It’s the early 1800s and folks do seek entertainment. The museum builds, of course, into a circus and it’s fun to see the permutations arise. P.T. Barnum likes to make a buck, is willing to take chances, and he respects but will use society outcasts – tiny Tom Thumb, a giant, bearded lady, dog boy, and more. Ultimately he seeks some acknowledgment, for the sake of his daughters. By wrangling a rich dandy (Zac Efron) into joining the business, Barnum hopes for legitimacy. He also branches out with Jenny Lind (Rebecca Ferguson) – vowing to make her famous in America. But she has eyes for him, wants to compromise him, and again he steps too close to fire.

The Greatest Showman is a spectacular film – colorful, full of pleasant tunes, an American rags to riches tale with a sideshow of memorable characters. And Zendaya flies overhead on her trapeze. Step right up folks and buy your ticket. Let Hugh entertain you in his top hat and red coat. Fill up on the cotton candy dream.

P.S. Barnum & Bailey Circus closed for good in 2017.  Just see the story on the big screen