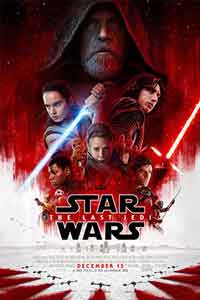 Star Wars: The Last Jedi has more than myth going for it. This is a movie filled with character, emotional arcs, and a real story line.  It’s exciting and rich filmmaking. I still would have cut approximately thirty minutes (yes, I realize I am not the target audience, but some of the air battle scenes go on too long.  We get it – zoom zoom, swish, and shoot)  (And there is one too many trips up and down the mountain with Luke and Rey – we get it. He’s trying to break her down. And gee – she’s persistent).  Picky, picky, I know, but that’s me being a critic.

Otherwise, Rey (Daisy Ridley) is in fine form and showing more and more power. Her confidence grows and she’s learning. Kylo Ren (Adam Driver) is evil, yet we get more of some emotional undercurrents.  Po, Finn, Laura Dern as a military leader – steely enough, and new Resistance worker bee – Rose – all get to rise to the occasion and be a hero.  I’m not going to delve into more plot line. Suffice to say, the Resistance is battling the First Order and the Supreme Leader Snoke. Take sides and root for winners.

And there’s Leia – the late Carrie Fisher – still in the film, still important. The filmmaking they achieved when she was alive is fabulous. She’s grand, she’s funny, and she lends gravitas. As for Luke, is he the last Jedi? Mark Hamill’s blue eyes are more vulnerable, less piercing. Older, wiser, and weary – Luke is a key to the magic.

Star Wars: The Last Jedi is one to see on the big screen. I know it came out before Christmas, but if you haven’t seen it yet, what are you waiting for? A galaxy far, far away….