Book Review - Our Souls At Night 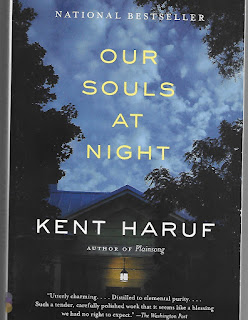 Our Souls at Night by Kent Haruf is a rather pleasant, low-key read. Haruf’s style is quite folksy, and he develops rich characters. Even with a slow pace, you want to hang out and visit with these people. Have a beer and/or a glass of wine with Addie Moore and Louis Waters, and see where it takes them.  Holt, Colorado is a small town with plenty to gossip about and when Addie and Louis start to be seen together (why, he’s knocking at her door after dark!), well…shut my mouth!

Turns out, Addie knocked on Louis’s door with a proposition. Why not come over and spend the night? No, not in THAT way, for goodness sake. Just companionship. Both spouses passed a while ago, and the nights sure do get long. Louis contemplates this turn of events and calls her – I’ll be over tomorrow night, if that’s okay.  Sure. And there you go – a budding new friendship is in the works.
They ask each other questions and talk. They also sit in companionable silence. But there’s something to be said for just hearing breathing, having a touch of a hand, and a meal together.

Things blossom. Their adult kids are shocked and question what’s going on in their lives. And unfortunately, some senior health issues come into play.

I recommend reading the book first and then watching the Netflix version starring Robert Redford and Jane Fonda. Excellent pairing/acting and fairly close to the book until the end. Typical Hollywood. But that’s okay. If you read the Our Souls at Night first, you’ll know the author’s intent.

P.S. Kent Haruf’s lack of quotation marks drove me crazy.  He said. She said. None of that at times. It took me a bit to get into his rhythm. Harrumph.