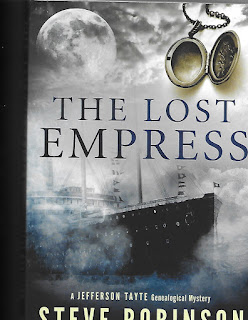 Steve Robinson writes Jefferson Tayte genealogical mysteries. The Lost Empress is his fourth in the series, but does stand alone. A foggy night in 1914, the Empress of Ireland sinks in the St.Lawrence River. It crossed the ocean from England. Cover blurb – When genealogist Jefferson Tayte is shown a locket belonging to one of the Empress’s victims, a British admiral’s daughter named Alice Stillwell, he must travel to England to understand the course of events that lead to her death.

As an expert tracker, Tayte unravels truths about a maritime tragedy, pre-WWI espionage, and Alice’s life. Plus he’s caught up in solving a present day murder too. In The Lost Empress, the author takes us back and forth in time in various chapters.  We meet Alice, a strong-willed young woman, who is entangled in a kidnapping and ransom plot. Being the daughter of an admiral presents her with opportunities that cause her a lot of grief. Alice’s story part of this book is strong and well written. As the story builds toward her boarding the Empress, intrigue grows.

Meanwhile, the Jefferson Tayte part of the book has various  interesting parts, but also aspects that bog down the action. I found him to be a tad preachy and ponderous at times.  I found I zoomed through his chapters to get back to Alice. Ultimately, bits all tie together in a very satisfying ending. I won’t give anything else away. The Lost Empress is a quick breezy read. It was a book club selection but I’m not sure how much there is to discuss. If you are going on a cruise, look out for spies on the upper deck!