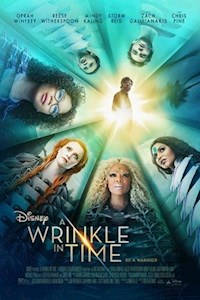 I had mixed emotions going into A Wrinkle in Time. I’d read the book by Madeleine L’Engle and really liked it (read as a girl and recently with an adult perspective – it is a classic for a reason). I had also read so-so reviews, but the previews, to me, looked promising.  Drum roll results – I give it a B-/ C+.  I believe Ava DuVernay, the director, had grandiose plans and she did okay. But there are a lot of buts – like at times the movie felt slow. I was ready to tesseract (space/time travel) into some new scenes.  I’m not going to discuss story line – read the book to experience a lot of grand ideas about science, and girls, and confidence, and empowerment.

I will say that Storm Reid, our heroine Meg, is quite good. I look forward to seeing her in more projects. She seemed “real”. As for the fairy godmothers of sorts – Reese Witherspoon was annoying, Mindy Kaling did not have much to do, and Oprah played Oprah. Her Mrs. Which is supposed to make pronouncements and help Meg see her strengths, etc. I was very conscious that  it was Oprah on the screen doing her Oprah thing well, and when was Dr. Phil going to show up? That’s a problem.  The younger brilliant brother, Charles Wallace (Derie McCabe) was too winsome and precocious. I kept thinking of the kid who plays Young Sheldon on television and I felt he would have been better in the role.  See, I had time to think about this random stuff while watching the movie.

But then some of the stuff would work, and I was certainly rooting for Meg to find her Dad (Chris Pine), to get confidence in herself, to realize that everyone has issues (even the mean girls in school), and to get out of her rut. I was happy with the final results and a lot of the special effects were cool. For my matinee dollars, I was entertained. However, I think this is a movie many will be happy to snooze through on Netflix on a Saturday night. Your own microwave popcorn is cheaper than the theater. So, I’ve saved you some dollars. Use them to buy the book and read it!! That’s the Wrinkle in Time to explore.