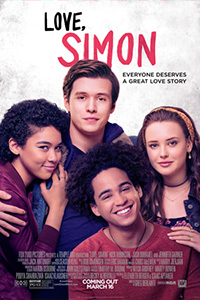 Simon Spier (a charming Nick Robinson) is seventeen and considers himself a “normal” teen who’s fortunate. He’s got great friends (Katherine Langford, Logan Miller, et al), wonderful parents (Josh Duhamel and Jennifer Gardner), a sister he enjoys, teachers he likes, and plans for the future. But. There’s always a but. He’s got a secret and it’s really starting to bother him more and more. He is gay and it’s getting harder to hide it. He’s known since junior high age. He dated girls but the spark wasn’t there. Now what?

Love, Simon is a sweet movie with a nice message about being true to yourself. This does not hammer the issue over your head. It’s not trying to convert anyone. The movie shows a really nice kid who just wants to live his life, not make a big deal out of it, but be able to move on and find true love. Throw stereotypes out the window – he dresses on the preppy side, but just like every other kid shopping at the Gap or wherever. He likes current music, movies, and his best friend is female. He doesn’t want to change the dynamic of his life.  Posted on an anonymous “facebook” like school page, another young man nicknamed “Blue” basically says the same thing – “I’m gay, but it’s a secret and my life is like a ferris wheel full of ups and downs.”  Simon starts emailing Blue and feels a connection.

Slowly, Simon deals with his secret, deals with a cyber bully issue, deals with hurt friends, tells his folks, and goes through a miserable period. So, will he find “Blue”?  Will his friends accept him again? How are his dad and mom? Love, Simon is a bit Hollywood neat – ties up a lot of issues in less than two hours. But it’s a refreshing, funny, and well done movie. Good acting and a good message for anyone. Root for Simon. You do have to be true to yourself before you can move on in any aspect of life.