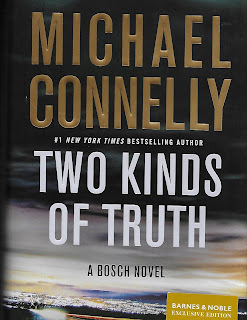 Two Kinds of Truth by Michael Connelly is another winner in his long line of Harry Bosch novels. You just can’t go wrong with this author’s character, plot, and writing. He has just the right twists and turns to lead to a satisfying ending.  Harry has his flaws, but he also cares so much about detective work. He’s retired, but still helping independently part-time. His intensity, thought process, and persistence are what make up a great detective. You want him on your side.

Two pharmacists were murdered in a robbery. Sifting through clues leads Bosch into “the dangerous world of prescription drug abuse.”  Undercover work proves eye opening and dangerous for Harry.
Meanwhile, an old case haunts him – “a killer on death row claims Harry framed him”.

Cover blurb – the Two  cases wind around each other like strands of barbed wire. Along the way, Bosch discovers that there are two kinds of truth: the kind that sets you free and the kind that leaves you buried in darkness.

Two Kinds of Truth is fast paced and true to form. Once again a very satisfying read from Michael Connelly.